Week 1: Overview of the Old Testament #1

“Welcome to week one of the David Pawson Bible study. We’ll begin at the beginning with an overview of the Old Testament. The studies over the next several weeks will be based on David Pawson’s epic work Unlocking the Bible. Each week we will explore the books of the Bible – why they were written, to whom they were written and why they are important to us today. If you’ve ever struggled with a particular book of the Bible, finding it either too boring or too mysterious to grasp, this easy to understand study will literally ‘unlock’ the Bible for you. It’s a good idea to read David’s introduction to this work before you begin – you’ll find it interesting and informative! Now, let’s unlock the Bible!”

Week 1: Unlocking the Bible – Overview of the Old Testament

God has given us a library of 66 books. The Latin word biblia, translated as ‘bible’, literally means ‘books’. The 39 Old Testament books, which cover over 2,000 years, were written by a variety of authors and include many types of literature. It is no surprise, therefore, that many people come to the Bible wondering how it all fits together.

God did not arrange the Bible topically so that we could study themes individually: he arranged it so that we could read a book at a time. The Bible is God’s truth about himself and how we should relate to him, set in the context of history. It tells how people, principally the nation of Israel, came to experience God for themselves and respond to his Word. Far from being a dry theological textbook, it is the vibrant story of God’s redeeming work in the lives of his people.

Many fail to grasp the overall message because they have an insufficient understanding of the background to the Bible. This chapter aims to provide an overview of the Old Testament so that any particular portion of Scripture can be given its correct context.

If we are to understand the Old Testament there are two maps we need to appreciate first of all: those of the Promised Land and the Middle East.

The key area in the map of the Middle East is what geographers call ‘the Fertile Crescent’ – the band of fertile land which stretches from the River Nile in Egypt in the west, north-east through the land of Israel and then south and south-east to the plains surrounding the rivers Tigris and Euphrates in what used to be called Mesopotamia (which means ‘the middle of the rivers’, meso – ‘middle’ and potamia – ‘rivers’). This fertile area comprised the centers of power in the ancient world, with Egypt located in the west and Assyria and later Babylon in the east. Israel was wedged between these two and much of the Old Testament is written with the struggles between these world powers in the background. There are also significant times when their threats or activities impinge directly on Israel.

Israel’s geographical position made it significant as a trade route. The Syrian Desert to the east of Israel meant that traders and armies from the orient needed to cross Israel’s border as they moved between Asia, Africa and Europe. A mountainous area of basalt rock to the south-west of the Sea of Galilee funneled the travelers through Jezreel and on through to Megiddo. A great trunk road entered Palestine through the Syrian Gate, running through Damascus, across the Bridge of Jacob’s Daughters and over a basalt dam to the Lake of Galilee. It then ran south-west via the Plains of Megiddo to the Coast Plain, through Lydda and Gaza to Egypt. Israel was a narrow corridor – to the east was the rift valley, which ran north to south down to the Dead Sea, and to the west was the Mediterranean Sea.

Israel, therefore, was at the crossroads of the world, with trade routes arriving from all directions and Megiddo the place where they all met. Overlooking this ‘crossroads’ was the village of Nazareth, and doubtless Jesus would have sat on the hill there and watched the world go by.

This location has spiritual significance. God was planting a people at a crossroads where they could be a model of the kingdom of heaven on earth. The whole world could see the blessing that comes to people living under God’s rule – and the curse that comes when they disobey. Israel’s unique position is no accident.

Turning to the internal geography of the Promised Land, the northern part containing the crossroads of the world was called Galilee, or ‘Galilee of the Nations’ because of its international flavor. The southern part, Judea, was more mountainous and isolated from the rest of the world, encouraging a more distinctively Jewish culture with the capital of Jerusalem at its center. 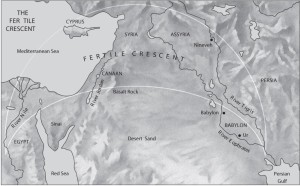 The Promised Land is about the same size as Wales, but it includes every kind of climate and scenery. Wherever you live, there is somewhere in Israel that is just like home. The place most like England is just south of Tel Aviv. Carmel in the north is known as ‘Little Switzerland’. Just 10 minutes from Carmel you can sit down among palm trees. Prominent in the land is the River Jordan, which rises on Mount Hermon and runs north to south within the rift valley mentioned earlier, through the Sea of Galilee and down to the Dead Sea. A fertile plain surrounds its course.

All the flora and fauna of Europe, Africa and Asia can be found in Israel. Scots pine trees grow next to palm trees from the Sahara. In biblical times the wild animals in the country included lions, bears, crocodiles and camels. It seems as if the whole world was somehow squeezed into one small country.

Having made ourselves familiar with the general geography of the Old Testament world, we now need to consider an outline of the history of the Old Testament. It may sound daunting to have to cover 2,000 years or more, but a simple chart will help us to grasp the basics (see p. 21).

The Old Testament covers over 2,000 years of history before the time of Christ. Genesis 1-11 covers the ‘prehistoric’ part – the creation of the universe, the Fall of man in the Garden of Eden, the Flood and the Tower of Babel. The focus here is on humankind in general, though including a ‘godly’ line. But we can chart the history of Israel itself from 2000 BC, when God calls Abraham (though it would be centuries before the nation was formed).

The Old Testament period can be divided into four equal parts of roughly 500 years each. Each period has a key event, a prominent person and a type of leadership.

In the first period the patriarchs led Israel: Abraham, Isaac, Jacob and Joseph. In the second period Israel was led by prophets, from Moses to Samuel. In the third period they were led by princes (kings), from Saul to Zedekiah. The fourth period saw the priests take the lead, from Joshua (a priest who returned to Judah from exile under Zerubbabel’s rule) to Caiaphas in the time of Christ.

None of the leader types was ideal and each individual brought his own flaws to the task. The nation needed a leader who was a prophet, priest and king, and they found him in Jesus. Each stage, therefore, was a foreshadowing of the ideal leader who was to come.

This time line is broken by two 400-year gaps. The first comes between the patriarchs and the prophets around 1500 BC and the second after the priests at 400 BC. During these two sets of 400 years God said nothing and did nothing, so there is nothing in the Bible from those two periods. There were some Jewish books written in the second of these two periods, known collectively as the Apocrypha, but they are not part of the Bible proper because they do not cover the time when God was speaking and acting. Malachi is therefore the last book in the Old Testament of our standard English Bibles, then there is a 400-year gap before Matthew’s Gospel.

It is especially interesting to note the events in world history which took place during these two gaps. The Egyptian, Indian and Chinese cultures developed during the first gap, while in the second Greek philosophy developed through Socrates, Plato and Aristotle. Other great figures of this time include Buddha, Confucius, Alexander the Great and Julius Caesar. So much happened which historians regard as important, but it was of little relevance to God. It was his history with his people which really mattered.”