Week 2: Overview of the Old Testament #2

A Brief Overview of the Books
Genesis 12–50 covers the first period of Israel’s history when the nation was led by the patriarchs (see the table on page 11). It is possible that the book of Job was written at this time, since there are parallels with the sort of life the patriarchs would have lived. 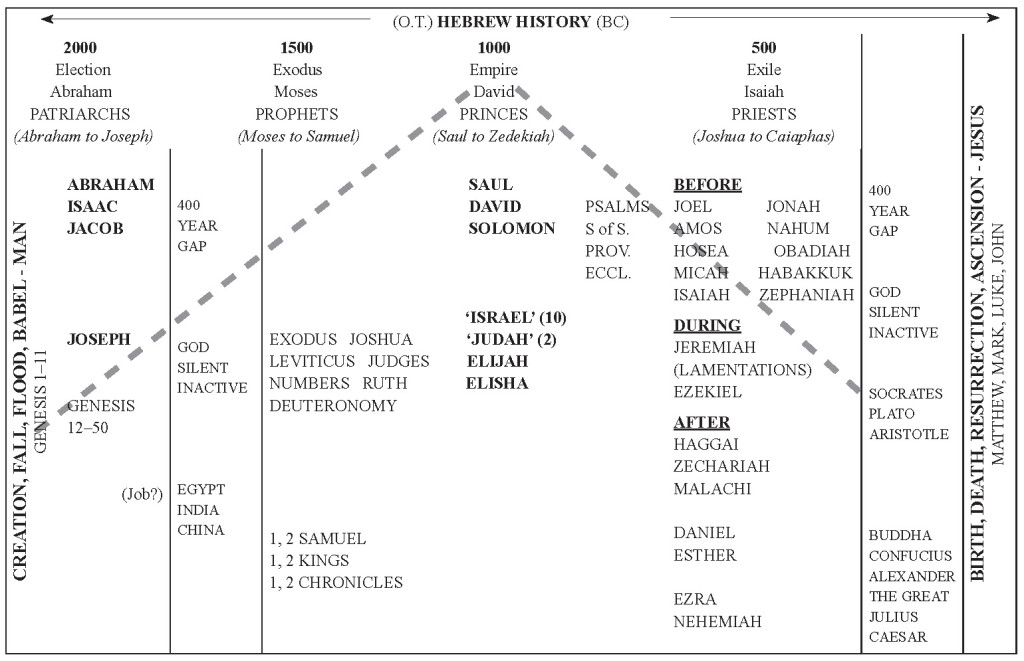 Relatively few books cover the next quarter. Exodus, Leviticus, Numbers and Deuteronomy were all written by Moses. The books of Joshua, Judges and Ruth continue the history of that period.

There are more books associated with the third quarter: Samuel, Kings and Chronicles, plus the poetic books: Psalms, Proverbs, Ecclesiastes and Song of Solomon. During this third quarter and after Solomon’s time there was a civil war when the 12 tribes divided into two parts, the 10 tribes in the north calling themselves Israel, the two in the south Judah. This is the end of the united nation. There were prophets during that time – Elijah and Elisha – but they didn’t have their own books.

Finally there are a large number of prophetic books associated with the Exile (the northern kingdom of Israel fell to the Assyrians, then the tribes in the southern kingdom of Judah were forced into exile by the Babylonians). Some contain prophecies from before the Exile, some during it, some after, and some have a mixture because the prophet overlaps more than one phase. This tells us something of the importance of this event to Israel’s history. It meant the loss of the land God had promised them and struck at the heart of their identity as a nation.

Prophets warned the people that they were going to lose the land and prophets (sometimes the same ones) comforted them when they did lose the land. There were prophets urging them to rebuild the temple when they returned to Judah after 70 years away. The books of Daniel and Esther are written from Babylon itself. The prophets Ezra and Nehemiah helped to rebuild Jerusalem and renew the people once they had returned.

This brief outline is enough to demonstrate that the books of the Old Testament are not always in chronological order. The ‘history books’ are fairly accurately arranged, but the prophets are organized according to size not chronology. Hence it can be confusing to know who was speaking when.

The Rise and Fall of a Nation

There is another aspect of the chart given on page 11 which is worth underlining. The chart shows a dotted line representing the fortunes of the nation, which reach their height under David and Solomon. The line’s gentle rise indicates the progress up to this point, with a sharp drop once the peak is reached. Every Jew looks back to that period and longs for it to return. It was the golden age. They look for a son of David to restore their prosperity.

The last question the disciples asked Jesus before he ascended to heaven was about when he would restore the kingdom to Israel. They are asking the same question 2,000 years later.

The line continues its descent until Israel is exiled by Assyria in 721 BC and then Judah by Babylon in 587 BC.

Following the 400-year gap John the Baptist arrives, the first prophet for a long time. Then comes the life and ministry of Jesus. The New Testament covers 100 years compared to the 2,000-plus years of the Old Testament.

The Order of the Books 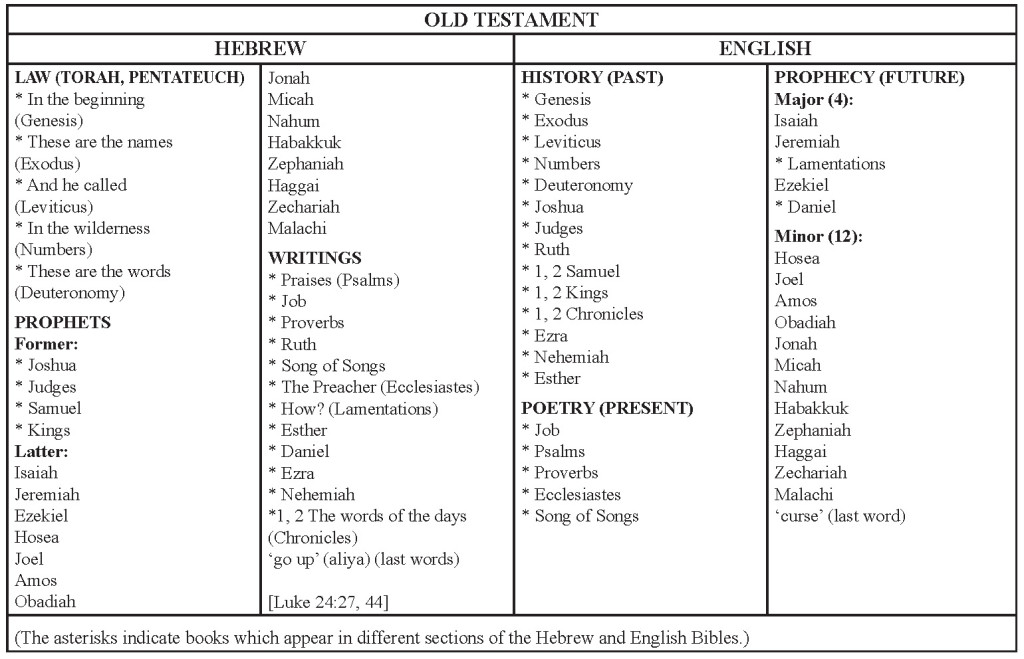 We have noted already that the chronology of Old Testament history is different from the order in which the books appear. There is also a big difference in the order of books as included in the English Old Testament compared with the Hebrew Bible. The English Bible is arranged in terms of history: Genesis to Esther, then poetry: Job to Song of Solomon, then prophecy: Isaiah to Malachi. The prophets are further split into the major prophets: Isaiah, Jeremiah, Ezekiel and Daniel, and the minor prophets: Hosea to Malachi. However, the descriptions ‘major’ and ‘minor’ are given because of the size of the book and nothing else. These divisions are generally highlighted in the contents page, if at all, so most readers are unaware of the change of category when they move from one section to the next.

The Hebrew Scriptures have three clear divisions. The first five books are not regarded as history but as law, and are known by the first words read as the scroll was unrolled. The next section goes under the title of prophets, a surprising title because it includes a number of books listed in the English Bible as history. Joshua, Judges, Samuel and Kings are called the former prophets, with the major and minor prophets (as they are called in the English Bible) listed as latter prophets. This is because the Jews see the history books as prophetic history – history according to how God perceived what was happening and what was important. All history is based on the principle of selection and connection – what is included and why it is included. The Bible’s history is no exception, except that it is the prophets under God’s inspiration who make the selection.

Ruth and the books of Chronicles are history within the English Bible but are not regarded as prophetic history within the Hebrew Bible. Indeed, there is no direct action of God mentioned in the book of Ruth, although the people in the story refer to him for blessings, and so on. Instead these books form part of the writings, the third and last division in the Hebrew Scriptures. There are more surprises here, for the poetry books are included, and Daniel, who we might expect to be included among the prophetic books.

This division may seem odd, but it is the division that Jesus refers to when he appears to the two on the road to Emmaus and the ten disciples, following his death and resurrection. We read about how he took them through the law, the prophets and the writings, and showed them everything concerning himself. This was the Old Testament division Jesus knew and accepted and I believe we could find it helpful too.

There are other Jewish history books which are not part of the Bible. The books of the Apocrypha are mostly ‘history’, although some contain other types of literature. They include fascinating stories, offering insights into the life of the Maccabees in their rebellion against the Greeks who occupied the land in the centuries before Christ. But these books were not judged to be records inspired by God and so were not included when the Old Testament canon was finally agreed. They have been incorporated into Roman Catholic Bibles. In this volume the books have been re-arranged in chronological order, more or less, so that readers may hear the words of God in the order in which he spoke them and thus make more sense of the progressive revelation they contain.