Next we come to the extraordinary fact that God wanted to live with Israel. He had already made his holiness very clear. When the law was given on Mount Sinai, God wanted the Israelites to be sure what his holiness meant. God said that no one could touch his holy mountain and live. Moses erected a fence around the bottom. The giving of the law was accompanied by thunder, lightning and fire, indicating God’s power and separateness from man.

But having emphasized his separateness, God then tells Moses that he wants to come down and live in the camp with them. Wherever they camp he wants to be there at the heart of his people. It will be in a tent in the middle of the camp and it must be a tent which communicates his holiness, so that the people will worship him respectfully.

This tent was called the “tabernacle” and Exodus gives us the building specifications which God laid down, in the laws concerning the religious life of Israel (Chapters 25-31). Everything about the tabernacle was to speak of God and the right approach to him. It was to be located in the center of the camp, with the 12 tribes arranged in sequence around it.

Most importantly, the tabernacle was not readily accessible, despite being in the middle of the camp. To begin with there was a fence 100 cubits by 25, high enough to prevent an outsider looking in. The fence had just one opening situated opposite the tribe of Judah. Inside the fence was a courtyard with an altar and a laver. 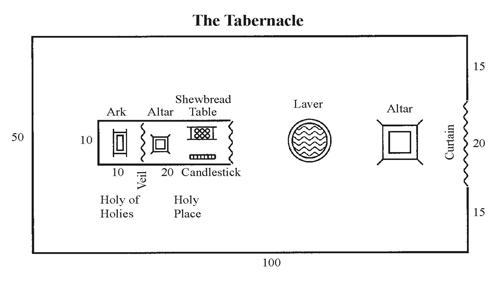 The first approach to God, therefore, would be through sacrifice: the animal would be slaughtered and then burnt on the altar in offering to the Lord. Then the worshipper would cleanse his hands in the copper laver between the altar and the holy place. Only then could God’s tent be approached. The tent had two sections, the place where God actually lived being a smaller part of the larger tent, a place shut off from human view and visited just once a year by the High Priest.

The larger part was 10 yards by 20 yards and was known as the holy place. Only priests were allowed to enter and then only if they had sacrificed an animal and cleansed their hands in the laver. It had three pieces of furniture. There was a table with shewbread, 12 loaves representing the 12 tribes of Israel. There was also a seven-branch candlestick lit by holy oil burning continually, and another altar for sacrifice next to a veil.

The beauty of the tabernacle must have been breathtaking, but most of it was hidden. There were beautifully embroidered curtains and coverings, but all were covered with a badger’s skin, hiding the beauty from the people. Inside were golden pieces of furniture and curtains embroidered in blue (the color of heaven), red (the color of blood), silver and gold.

The whole structure indicated that if you wished to come to God you must make a sacrifice first in order to be clean. God said that this was a copy of where he lived in heaven.

Even when this tent was dismantled and moved, all the elements were kept covered up. The tent had to be carried by specified people and the “ordinary” people had to keep a thousand paces away from it until it was erected again.

The holiness of God is also emphasized in the clothes of the priests. The High Priest was given specific instructions regarding what he was to wear. He wore 12 jewels on his chest representing the 12 tribes of Israel. These jewels are mentioned again on the last page of the Bible, which describes the New Jerusalem. The High Priest also wore a special girdle, turban, robe, ephod and coat.

The ordinary priests also had “robes of office”, but their requirements included only special coats, girdles, caps and breeches. We can discern in these different robes a picture of the one to come who would be the High Priest for ever on behalf of his people.

Up to that point, the people’s skills consisted only of constructing and transporting bricks, so the task of building such an elaborate tent would normally have been beyond them. We are told that Bezalel, Oholiab and others were given particular gifts by God to accomplish the building. This is the first mention of “spiritual gifts” in the Bible, and it is interesting that it should be in association with manual tasks such as these.

Moses was on Mount Sinai for a long time receiving the law. Not knowing what had happened to him, the people asked Aaron if they could worship a “god” they could see. So with Aaron’s help they melted down their gold to make a bull calf they could worship. The choice of animal was significant. As we have already noted, these animals were one of many idols used by the Egyptians. Bulls and calves were symbols of fertility and have been used as such down through history. It is a clear principle of Scripture that idolatry leads to immorality: loss of respect for God leads to loss of respect for people. A wild orgy followed. When Moses came down and saw what was going on, he smashed both copies of the law. He was symbolizing what the people had already done by their behavior.

Moses went back up the mountain and told God that he was fed up with the people, only to find that God was feeling just the same. We reach a key moment in the history of Israel and a pivotal moment in Moses’ leadership. Moses told God that if he was going to blot Israel out of his book, he should be blotted out too, as he did not want to be the only one left. He was effectively saying, “Take my life in atonement for them.” God explained that he only blots out of his book the names of those who have sinned against him, a theme picked up at various points throughout the Bible. The most important thing in life is to keep your name in the Book of Life. God said to Moses, “I blot out of my book those who sin against me.”

Moses insisted that the people were punished and God told him to deal with the ringleaders. Three thousand died. This precise figure may mean little to us, but the details of the Exodus narrative have some amazing correspondences with events in the New Testament. The law was given on Sinai on the fiftieth day after the Passover lamb was killed. The lamb was killed at 3.00 p.m. and on the third day after that the slaves were liberated. On the fiftieth day after the Passover the law was given, a day the Jews then called Pentecost. Three thousand people died because they broke the law. It was on that same fiftieth day centuries later, when the Jews were celebrating the giving of the law, that God gave his Spirit – and this time 3,000 people were saved (see Acts 2).

Where did the Israelites get all the materials they needed to build the tabernacle? At least one ton of gold was needed, not to mention the cloth, linen, jewels, copper and wood. There was an average gift of a fifth of an ounce of gold from each man.

God had told Abraham many centuries before that not only would his descendants be in slavery, but when they left the land of their captivity he would bring them out with great possessions. The materials for the tabernacle and the priests’ garments actually came from the Egyptians, who were so glad to see the back of the Israelites that they gave them all their jewelry. This tells us how they came to have the materials. They came to be used in the tabernacle because the people gave them, donated them for use in this way. Four words describe the nature of their giving: it was spontaneous, thoughtful, regular and sacrificial. This was not an enforced collection with penalties for those who did not give, but was purely down to the free decision of the people (“Everyone who is willing…”).

At the end of Exodus we are told how God took up residence and consecrated the tent. The people saw his glory arrive and they saw the plume of smoke or cloud above the inner room. The inner room became filled with light as the glory of the Lord came into it. God was camping with his people. Thereafter, when they saw the cloud and the light move they knew it was time to move on.